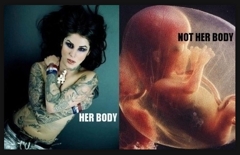 In what might seem an odd topic for this blog, I decided to start a post to debate the topic of abortion. I’ve recently posted in response to abortion related articles at CNN and other places. Since these places aren’t a great place for such a debate to take place (their ‘forum’ software is horrible for that kind of thing), I challenged people to come here.

Note: I won’t allow the literally thousands of ‘garbage’ comments (from either side) that frequent places like CNN (and others). This is a moderated blog! If you make a good argument in a reasonable manner, I’ll certainly admit it. If you can’t control yourself, please don’t bother.

To get the discussion rolling:

The issue is really pretty simple IMO. What is the unborn?

A) If the unborn is a living individual human being, then there can be no unjustified killing of that human.

B) On the other hand, if the unborn is not a living individual human being, then this debate is silly and abortion should pose no problem for anyone aside from concern over the negative health risks to the woman.

If A, then the Constitution already protects them and we have a huge legal contradiction with the current legality of abortion. (my position)

If B, then even pro-choice people shouldn’t care if abortion is reduced or not (as President Obama and so many others clearly stated they would like to see). The whole thing is a non-issue that we are wasting a lot of time debating.

Also, if A, then a bit of science knowledge and some rudimentary reasoning skills shouldn’t be above the pay-grade of anyone, let alone the President of the USA.

Also note: For people inclined to start by calling me a religious nut-job, I haven’t even mentioned religion yet. While I don’t think you can GROUND the US Constitution without doing some theology, that might be a topic for another post. Be warned, though, if you go there, my education is in theology and apologetics. You’ll be playing on my home-turf then.