Well Christmas and the Holiday season were going nicely this year… busy but I got some actual time off and I was really enjoying that. I’m certainly behind in my posting and editing the Intelligent Design article I had planned. But, 2005 went out in a bit of a wild way here in the Bay area. We got rain… lots of rain! It was the start of a rather different New Years event than I have experienced before.

I had come home around midnight from a day playing Gran Turismo 4 with a friend and parked Trixie (hey… you folks didn’t come up with a better name… don’t you feel bad now?) in her usual parking spot on the street curb by our apartment.

About 4am on Dec 31st, we were woken by doorbell and pounding on our door. Fortunately, it was a neighbor who had got up for some reason and noticed that things were being flooded. At the time, there was no water in our actual parking lot, but street was beginning to flood. Several of us ran to our cars to get them out of the street… the parking between our buildings is space limited, but on a bit higher ground.

Well, soon we realized that it was coming up into that area too, but the street would have been over Trixie’s dash for sure! As the water level got higher, we soon realize that our cars might still be in trouble… but there was no where else to go. Then we began to be concerned about our actual apartments. Our apartment is on the 2nd floor, but many of our neighbors were in possible trouble. We were house sitting the 1st floor apartment below us.

We watched the water level closely and it crept up steps, step by step. It was about 1 inch from invading the 1st floor apartments, when it stopped rising. It slowly began to drop. Some people had actually started to move 1st floor things to 2nd floor. We were all pretty tired from the excitement, yet no one could sleep as it was still raining, but it had slowed for sure.

In a couple hours, the water had dropped another inch or so, and it was beginning to get light. We could see more damage at this point and debris floating around. We were certainly lucky compared to many others in our community who lost homes, business, and lots of cars. I think 170 businesses in San Anselmo were badly damaged or destroyed. I heard a number of $50 million in damage being mentioned in this small town while I was out the other day.

Trixie did take some damage. There is about 2 inches of height difference between the door sill of the Miata and our Civic. The Civic was fine, but the Miata got an Inch or so of water on its floor. It initially started fine, but after driving a bit, wasn’t running so well, and the engine and ABS lights are on. I’m hoping after it is dried out, it is just something simple like water splashed in the spark plugs, or O2 sensor and brake pad sensors for ABS. Time will tell… she is at the shop now.

So, while this is not the start to the New Year I had been hoping for, I still have to be thankful for what we have. It could have been MUCH worse. Gave us just a small glimpse into what so many have gone through over this last year. Let’s hope this year is much better for the world in regard to natural disasters.

Here are some photos I snapped when it got light out. It was at least 3 inches higher at its peak level… maybe more. 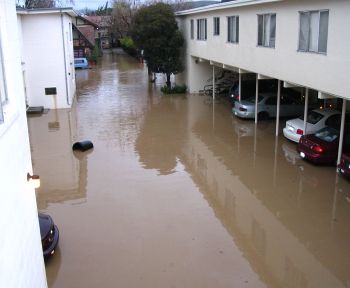 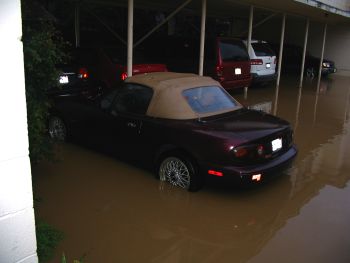 Steve Wilkinson • I enjoy creating things, whether artistic or more technical. Website design and 3D rendering blend these two skill-sets quite nicely (which is probably why I love them so much!). While I am not 'officially' trained as an artist, I have a number of years of experience working in related fields, such as technical drafting, 3D rendering & animation, and industrial design (more recently, BIM/Revit). I have even done some print work over the years. On the technical side, my experience ranges from being an independent consultant to a senior member of an IT staff at a Fortune 100. I'm also a husband, father, and Christian apologist. I am the founder and a designer/consultant at cgWerks. I am also a director/educator at TilledSoil.org, a Christian apologetics ministry. My personal blog is at SteveSpeak You can follow me on Twitter @SteveW928 or connect with Steve/cgWerks/TilledSoil.org on Facebook.